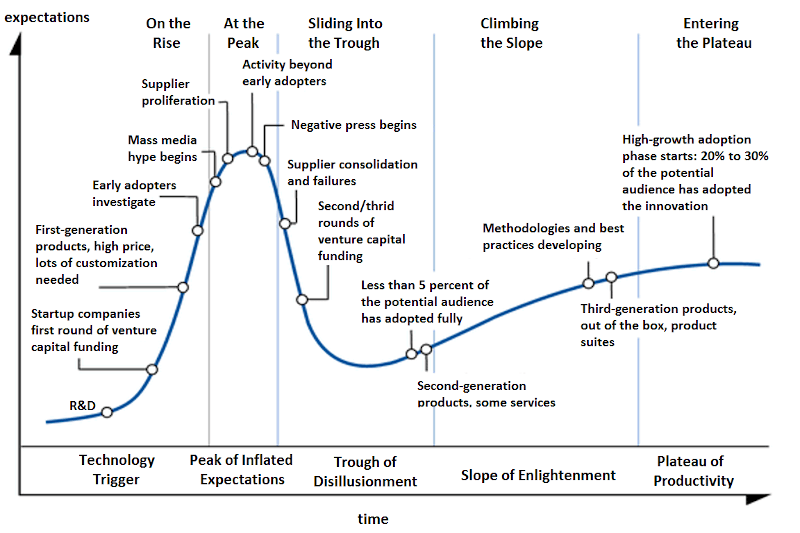 IOT IS HAPPENING - BUT NOT NECESSARILY UNDER THAT NAME

Many of you have become tired of hearing about IoT, the Internet of Things. Tired of the hype. Even working in IoT I can feel the IoT fatigue. For years you heard IoT this and IoT that. The expectations have been high. Probably too high for a while…

...but for us working inside IoT technology it’s evident that we are getting closer and closer to connecting most of our everyday things. People working in, or close to, IoT applications already see IoT as one of the main drivers of digital transformation. Applications are implemented in many industries and a few consumer products have hit the market as well. We can assume that connected sensors will be a part of more or less most value adding activities in the future.

But what is the current state of IoT? Well, it could be described using the so called “hype cycle”. The hype cycle was developed by Gartner to describe emerging technologies. It represents the maturity, adoption and social application of specific technologies.

From our point of view it’s evident that things are on the move. But it’s not obvious where we are on the curve. It partly depends on which sub-segment of the overall “IoT” market you look at. We have seen evidence for some segments being close to the peak of the hype, and other segments near the trough on the other side of the peak. Leading implementers are somewhere near the “slope of enlightenment”.

We might conclude that, depending on the market sub-segment within the general IoT market, we are somewhere between just prior to the peak and the trough on the other side of the peak.

If you haven’t noticed the change from something overhyped to something real it might be because some new implementations don’t use the term “IoT”. IoT isn’t a specific term. No general definition of IoT exists. And when no general definition exist companies tend to use it as they see fit, based on what it is to them (or what they want it to be). Also, when the hype peak has been reached using the term could become counter-productive. It’s expected that after the peak, you begin hearing less and less about IoT - and that might give you the false impression that the skeptics were right all along. Further, in an effort to differentiate in an increasingly crowded market, suppliers coin their own language and terms - for example at Wittra, we describe our market focus as the Internet of Moving Things (IoMT). We have also seen someone in another segment claim IoMT as the Internet of Medical Things!

But - don’t be fooled. The roll-out of IoT is very much happening, but it’s happening under many names. Not just under the IoT term. It’s a part of the maturity process of the technology.