We’re Ready For The Next Step 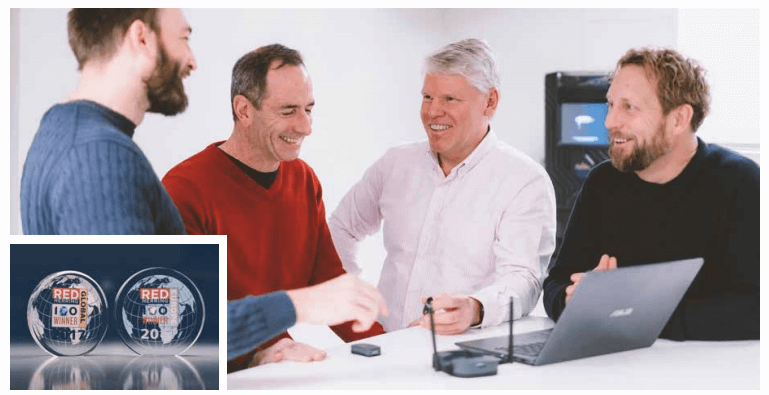 Connectedness. It’s becoming more and more prevalent each day, whether through the internet, smartphones, or other electronic devices. Technology has grown in leaps and bounds since the 1990s, and with it, industries such as the Internet of Things (the connectedness of objects) and the Internet of Moving Things (IoMT – the connectedness of moving objects). And it’s the latter that today is set to revolutionize our world.

It’s in this space that Håkan Dackefjord, founder, and CEO of tech company Wittra®, has developed a ground-breaking method for positioning and receiving sensor data from moving objects.

“Just 10 years ago people shook their heads at the idea that things could be connected,” he says. “Everyone asked what the benefits of connectedness could be – a self-driving car; a fridge that could order food… it was difficult to imagine. Now that we have the technology, however, more and more people are beginning to see and understand the value of connecting moving objects – not the least of which is an efficiency gain of up to 65% within the Internet of Moving Things.”

More than efficiency, however, the IoMT presents very real business opportunities as well. “By connecting objects, you can cut costs, increase production efficiency, improve stock management, and much more,” explains Dackefjord. “There are huge benefits to the industry, but they need to be taken advantage of now. The longer a company waits to adapt, the more it starts to lose out against the competition.”

With the potential for the IoMT already identified in 2012, Wittra was one of the first to realize what connectedness could mean for the future – and it’s for this reason that the company was quick to seize upon the opportunity, leading the way in new technology development and patented solutions.

It was out of this sharply focused dedication to innovation that the Wittra system was eventually born – a positioning and tracking solution with equal success both indoors and outdoors, that simultaneously solves the challenges of range and battery time – something that to this day, no other company has been able to do. Based on open standards such as BLE, Wi-Fi, 6LowPAN and ISM, both for collecting sensor data and for positioning, the Wittra solution is protected by an extensive portfolio of 51 patents and patents pending and is the only one of its kind in the world.

Primarily known as a research and development company, with its new system in hand Wittra is taking the next step in its growth, already involved in contract negotiations as of January 2018 – and, just as the future of the IoMT looks bright, so does Wittra’s as well.

“The IoMT industry is becoming the norm, and we’re seeing how more and more customers are choosing our technology over other alternatives,” says Dackefjord. “What that says to us is that what we’ve developed and patented over the last six years has been exactly what the market is demanding, which means that we’ve met customer requirements 100%. Our patents have also given us a head start over the competition, making it difficult for other companies to overtake us – which we’re seeing through an exponential growth in customer demand.”

THE FUTURE OF WITTRA IN THE INTERNET OF MOVING THINGS

So what does the future hold for Wittra in the IoMT industry? More partnerships, according to Dackefjord. “Our latest partnership is with a large mobile operator,” he reveals, “which will help us to meet the requirements of the IoMT even further, such as long battery life, global reach and high positioning accuracy. We were right in understanding the market in 2012, and if the conversations we’re having with our customers now are anything to go by, we’ll still be right in the next five years. We expect Wittra to continue increasing its turnover and domestic profit steadily as a result of improved market share and market growth, and that’s something we’re putting a lot of effort into achieving. The next step of our journey isn’t just in the planning stages, it’s already underway, and we’re aiming to enter the stock market in June 2018 as well.”

THE IMPACT OF WITTRA TECHNOLOGY

Since its inception in 2011, Wittra has succeeded in developing a unique positioning solution that allows devices to be tracked both indoors and outdoors, and over short and long distances, with a longer battery life than ever before. This innovative technology is protected with a total of 51 patents and patents pending, both for its core technology and its applications as well. These patents include several that concern the tracking and unlocking of devices, as well as unique car alarm systems, and communication and positioning via ISM, Wi-Fi and Bluetooth.

Thanks to its success in this space, Wittra has laid claim to a number of prestigious awards, including:

The Path to Future-Proof IoT

The Path to Future-Proof IoT

Why do IoT implementations fail?

Why do IoT implementations fail?